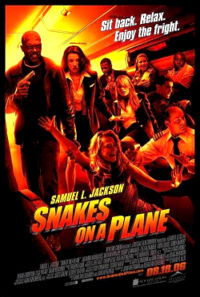 This is a term I just coined to mean: The fear of Snakes on a Plane.
スネークフライト or Snake Flight, as it is known over here (another kick-ass title, I must say) was released to minimal box office glory a few weeks ago. Seeing as today is the second-last day, and as it is メンズデー (Men's Day or only 1000￥for guys), I had to check it out. The half a dozen other guys who also saw it, weren't as amused as I was and I politely had to stifle my guffaws upon several occasions. Needless to say, I went into it expecting a stupid but fun movie and I certainly was not disappointed. It was a stupid but fun movie!

Although everyone who has ever logged onto the internet is aware of the line, "Enough is enough! I have had it with these motherf*cking snakes on this motherf*cking plane!", I'm sure they had to wait until they actually viewed the movie (or on-line) in order to hear it expressed by Samuel L. Jackson. Not so over here in Japan...I have heard that line bellowed out on commercial television in the middle of the day. No prudish censorship in Japan!

Alas this is what the Japanese translation of the above cool line renders:


俺様はヘビも飛行機も大嫌いだ！Oresama wa hebi mo hikoki mo daikirai da!
Which translates to, "I really hate snakes and planes!" Not quite as dramatic, is it?
Posted by Michael Jones at 10:57 pm