Unfortunately, there's only a week left to see Godzilla in Roppongi so I won't get to see him lit up at night. Here's a taste of his nocturnal activities:

I did though get to see him on a drizzly afternoon before I left for Canada.
(Over a month ago! Bad blogger!!)
Thanks to tour guide and photographer, Andy, for putting up with my antics. 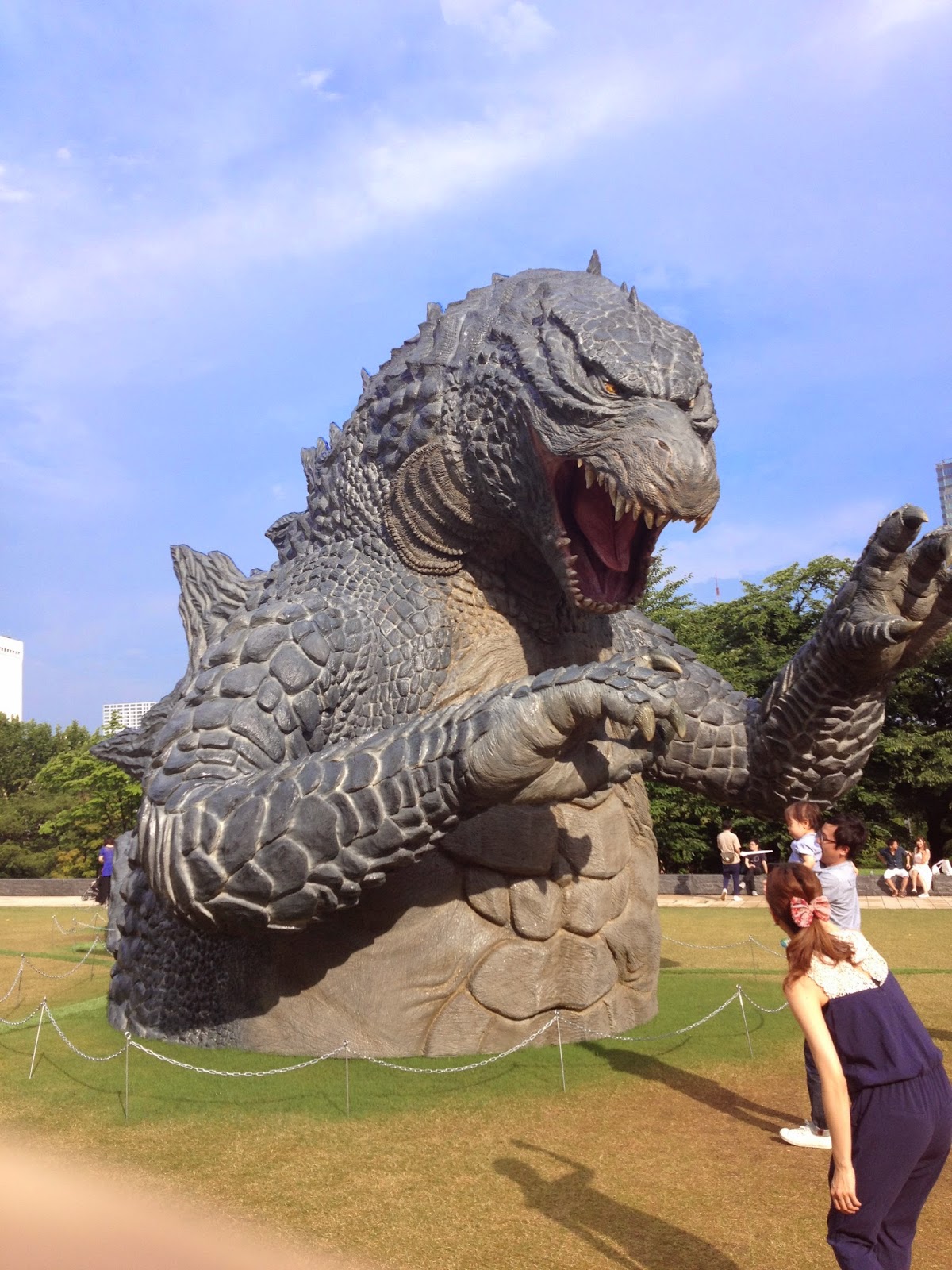 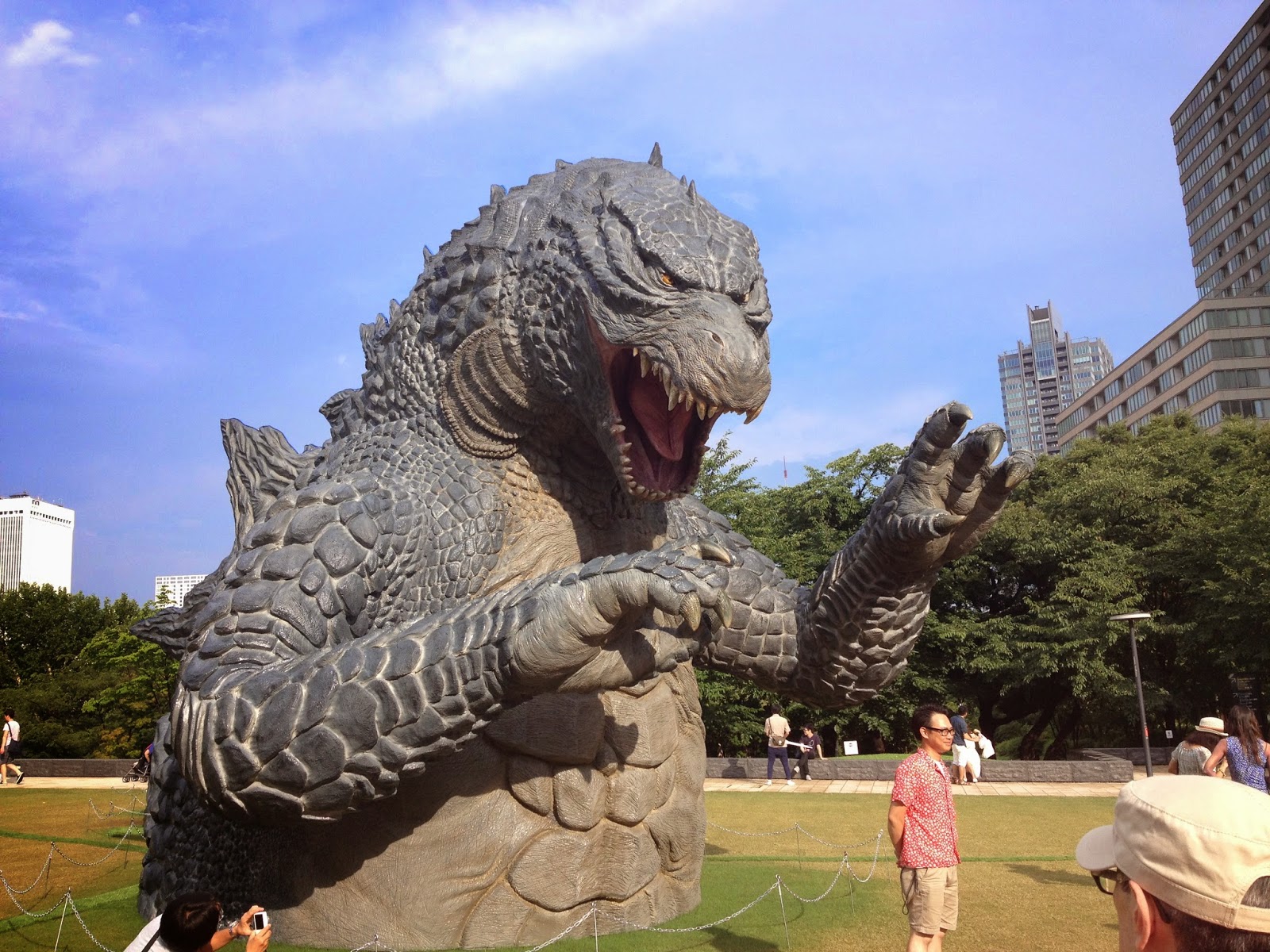 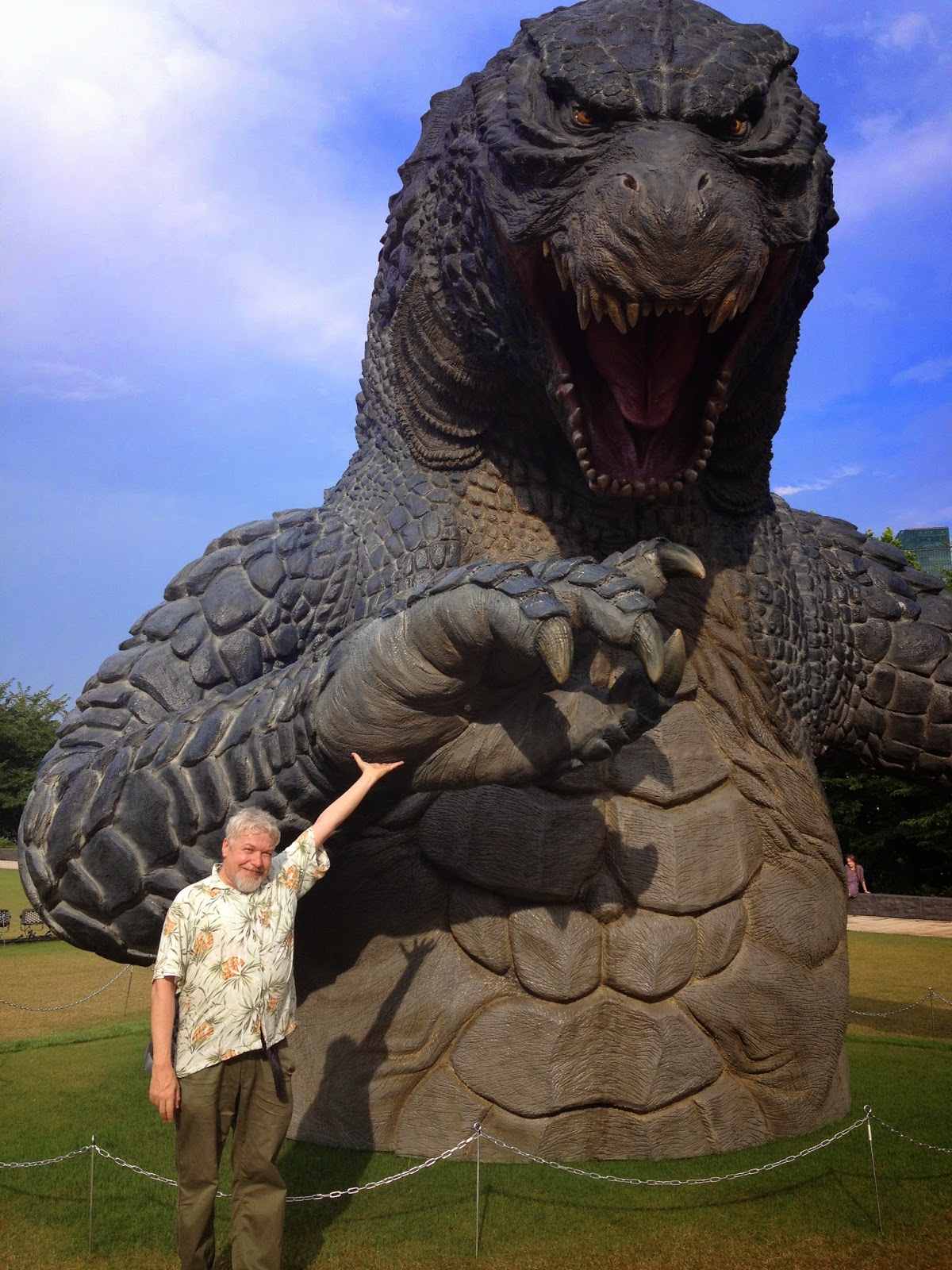 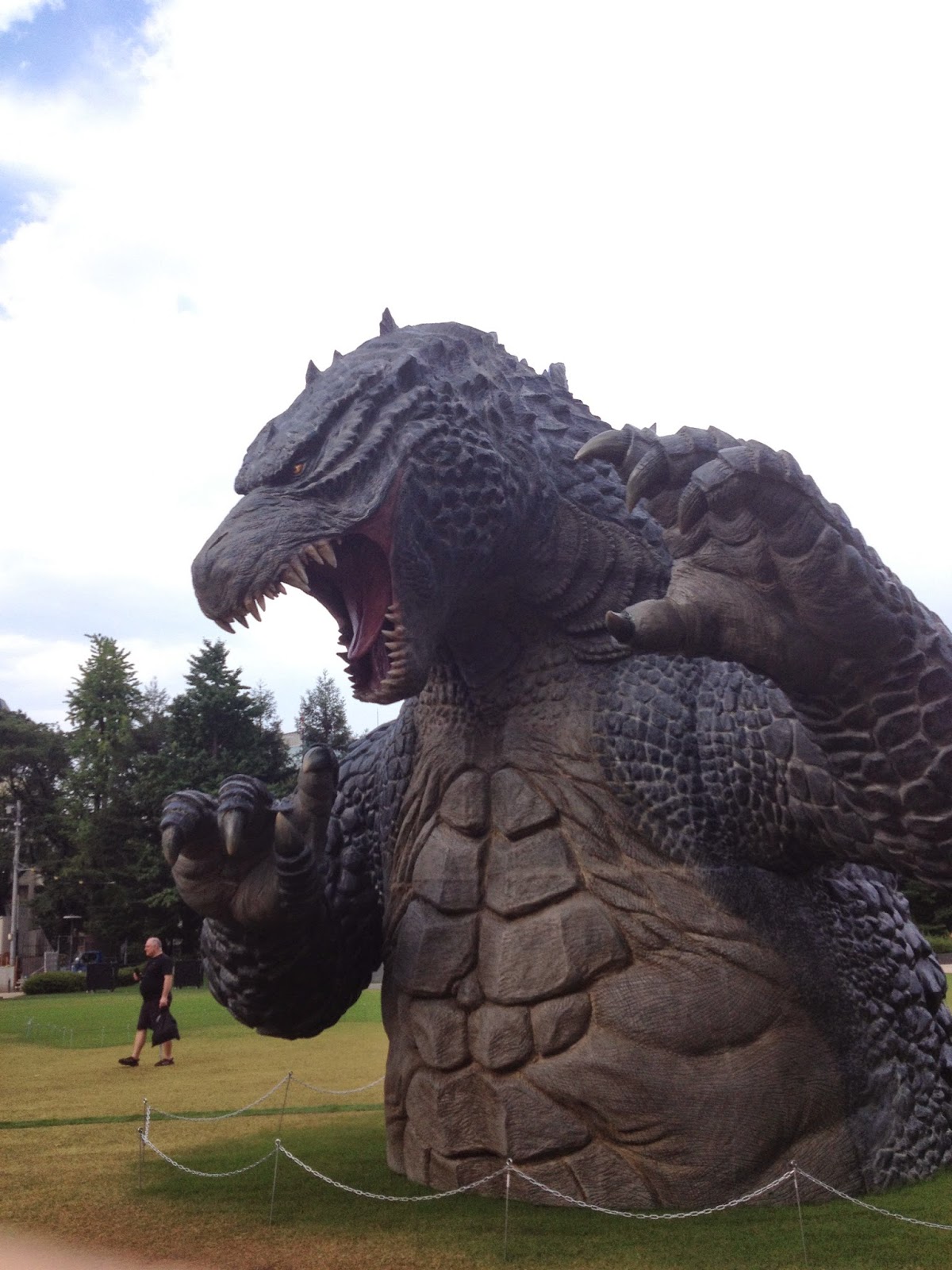 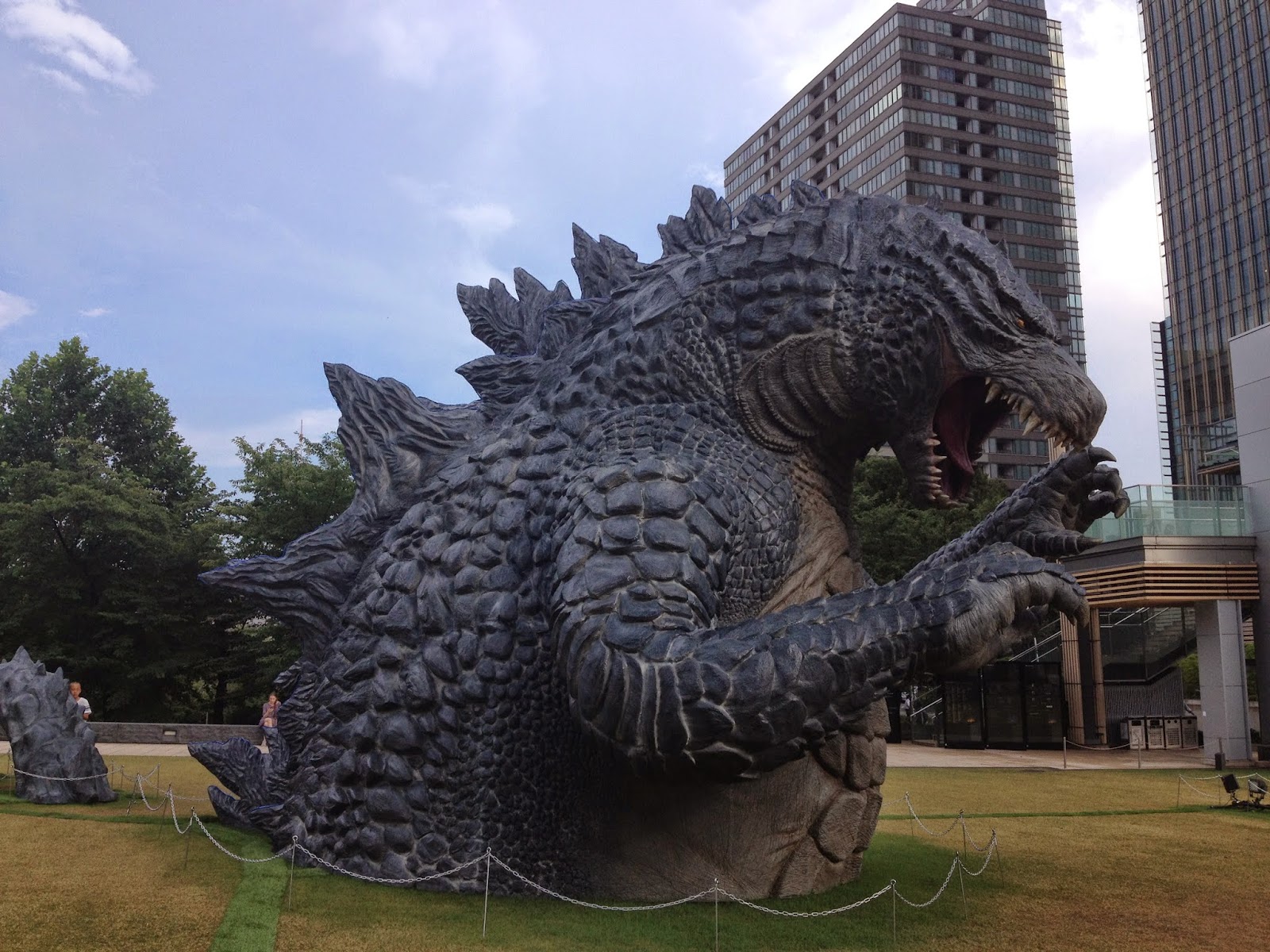 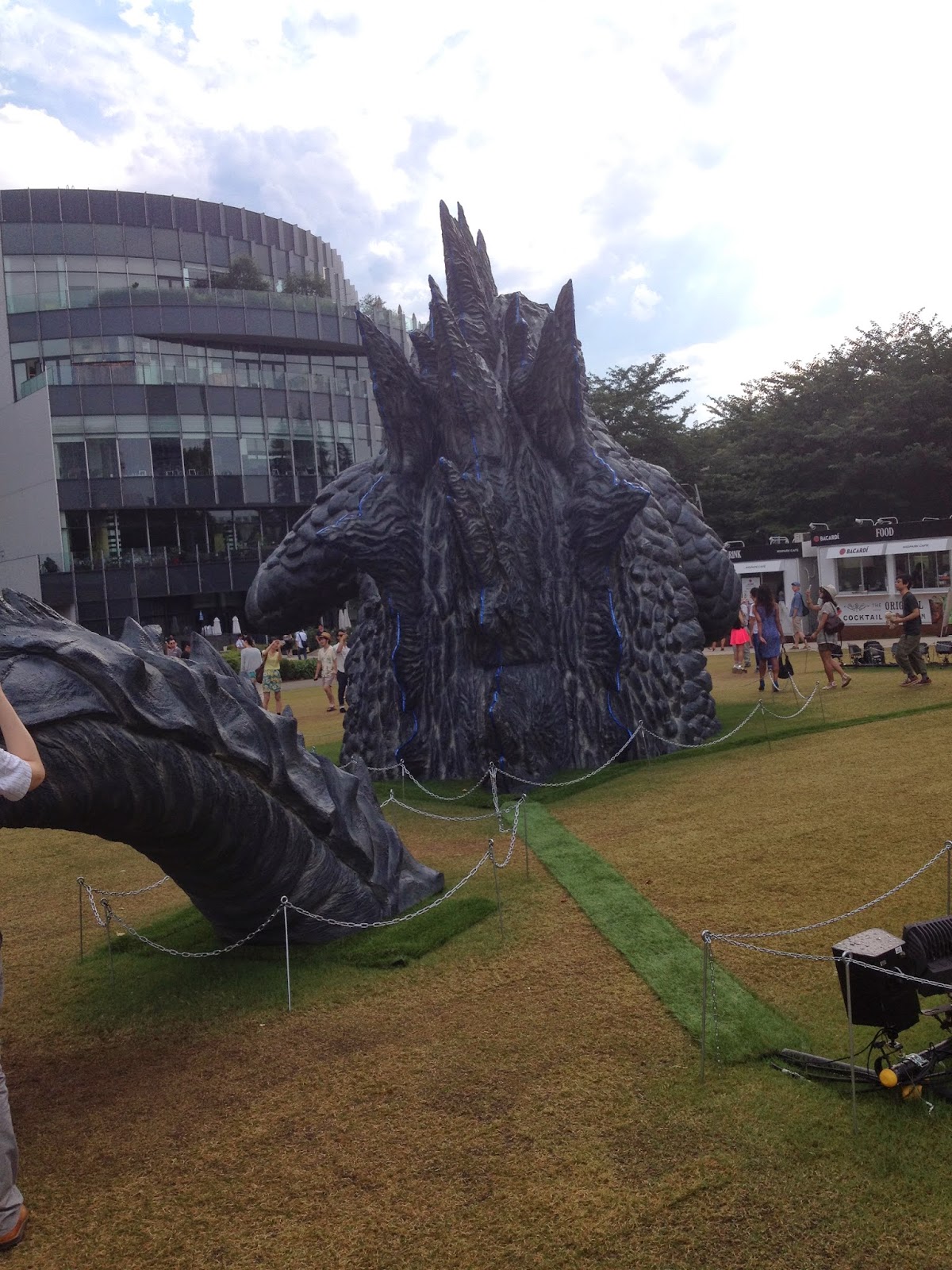 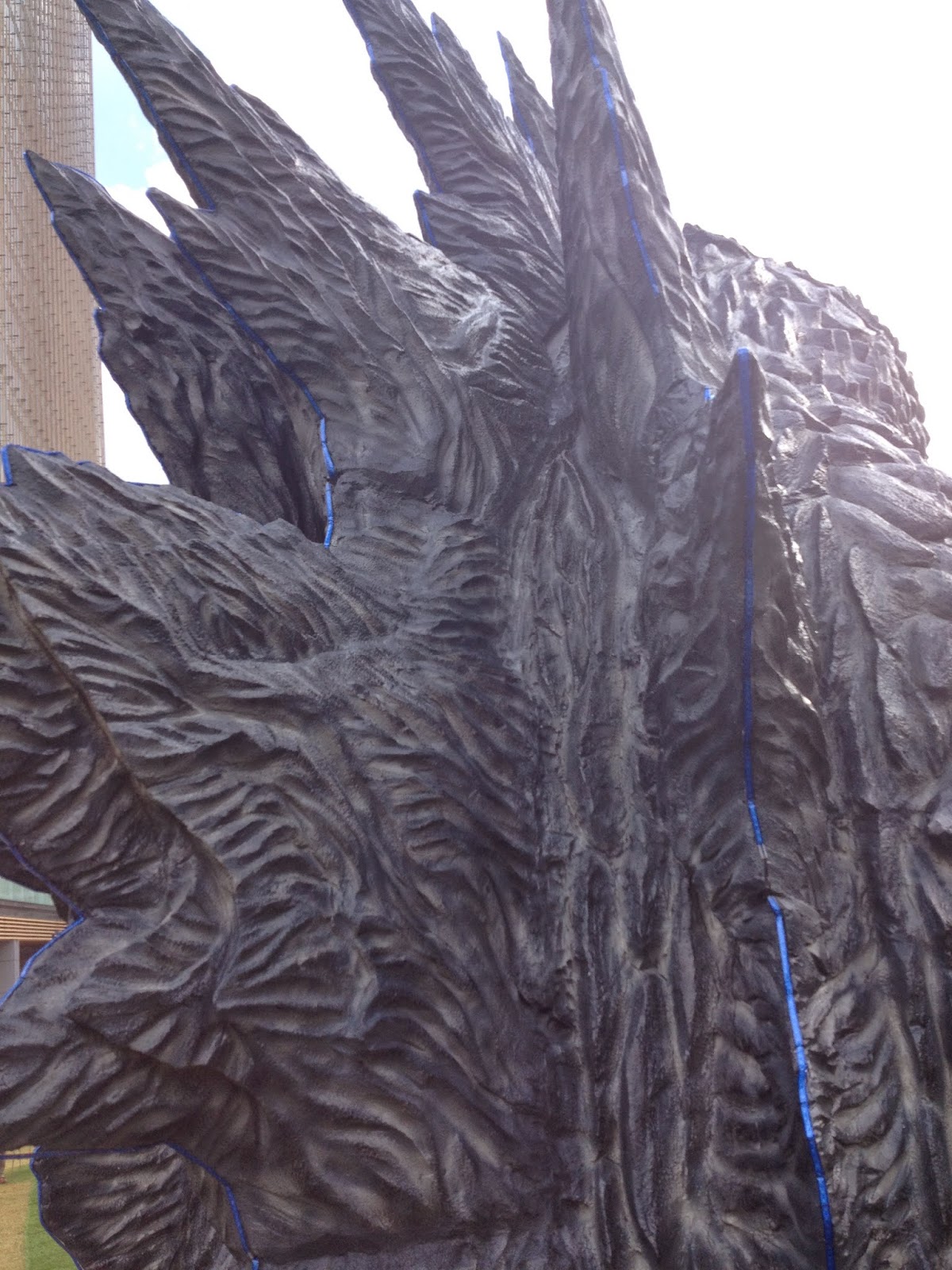 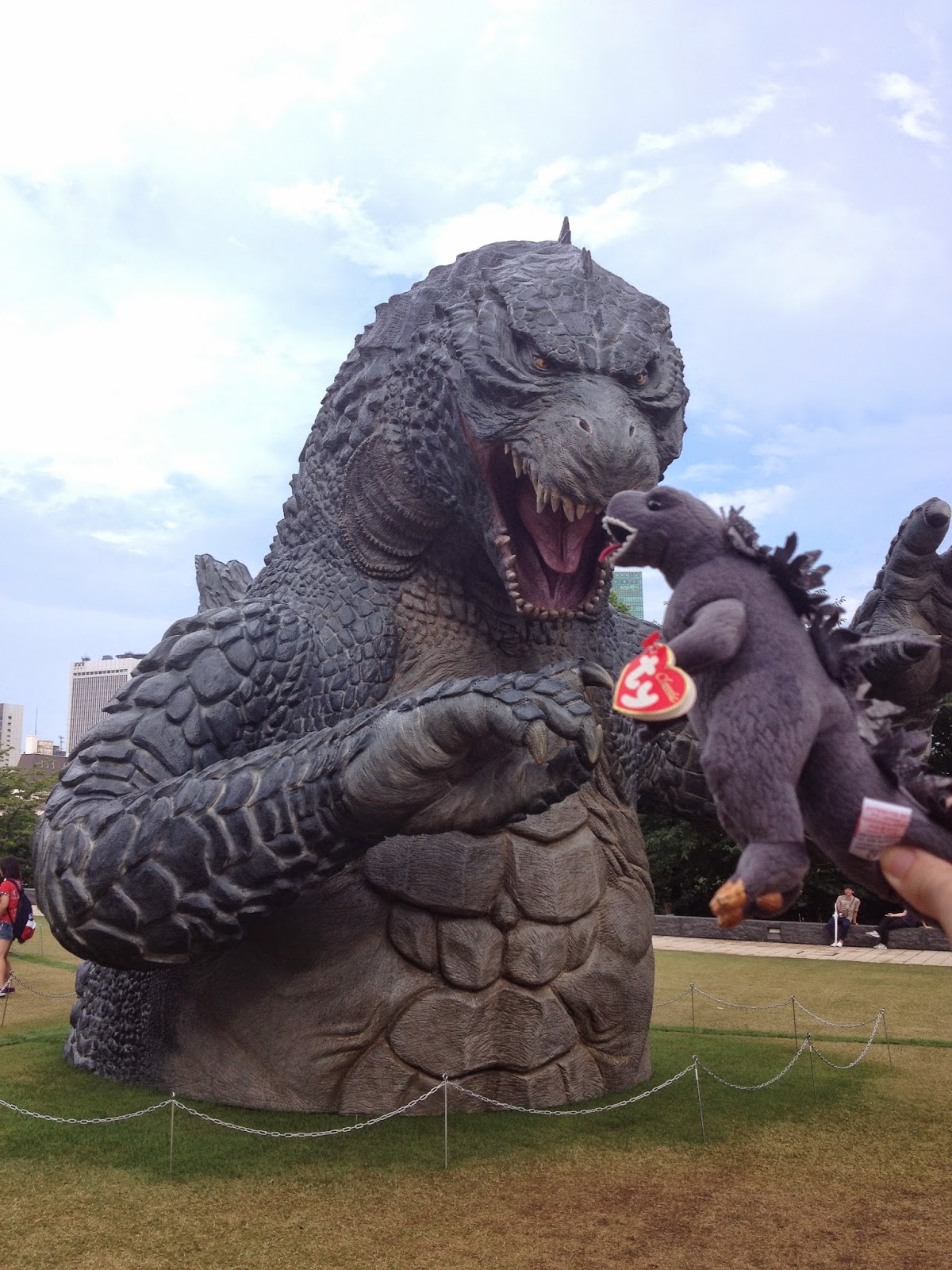 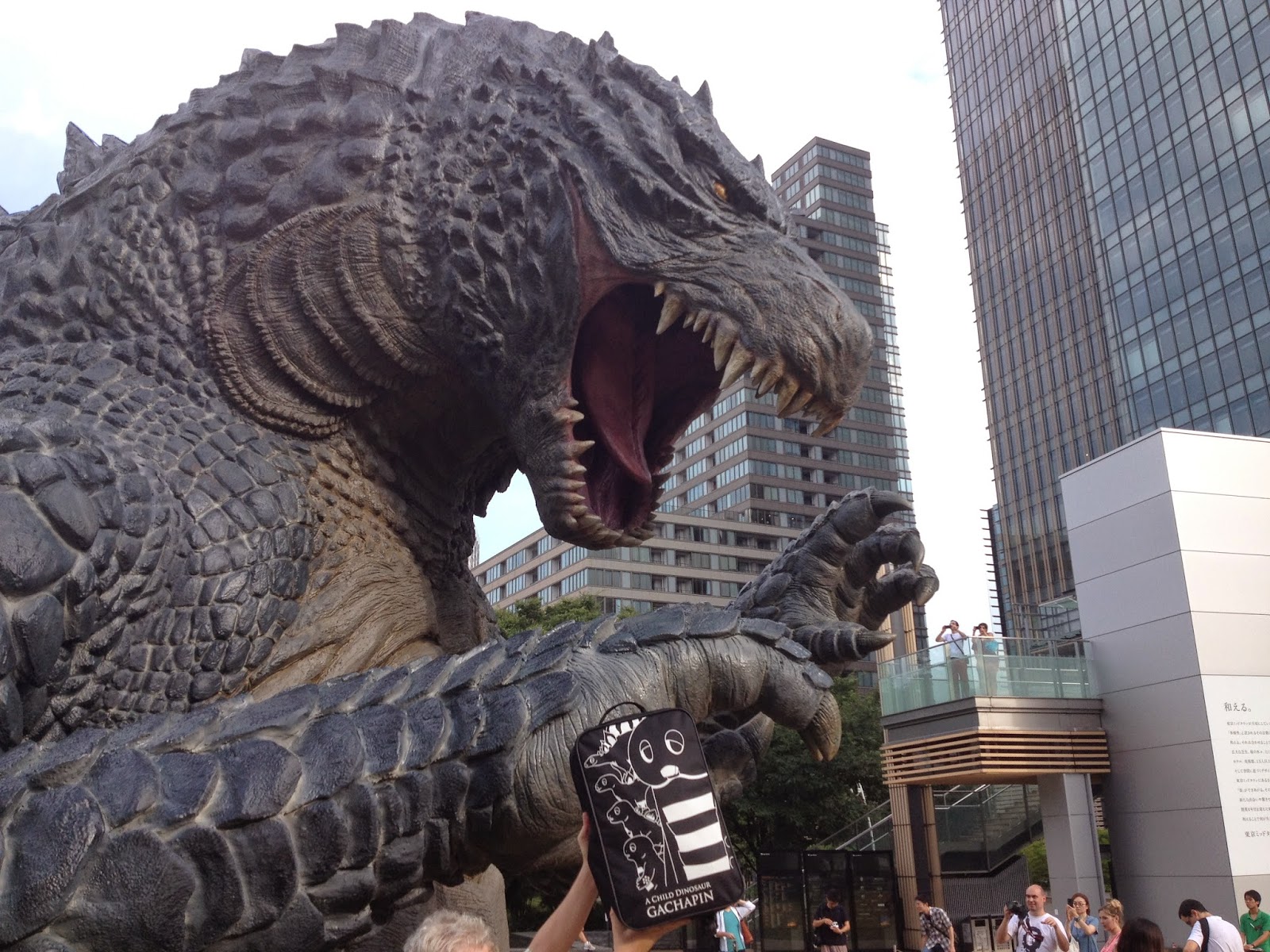 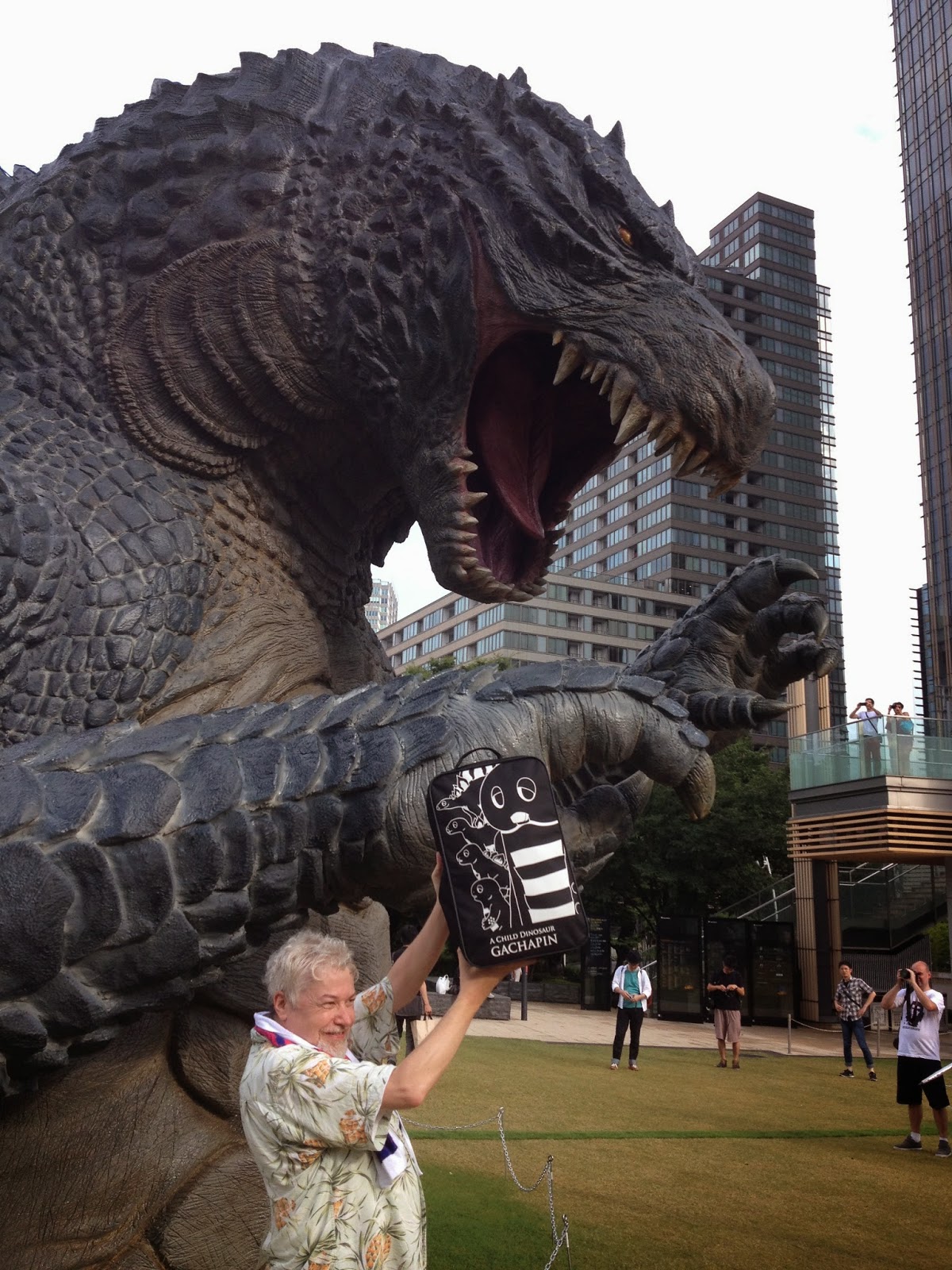 It's a banner year for Godzilla. Happy 60th! 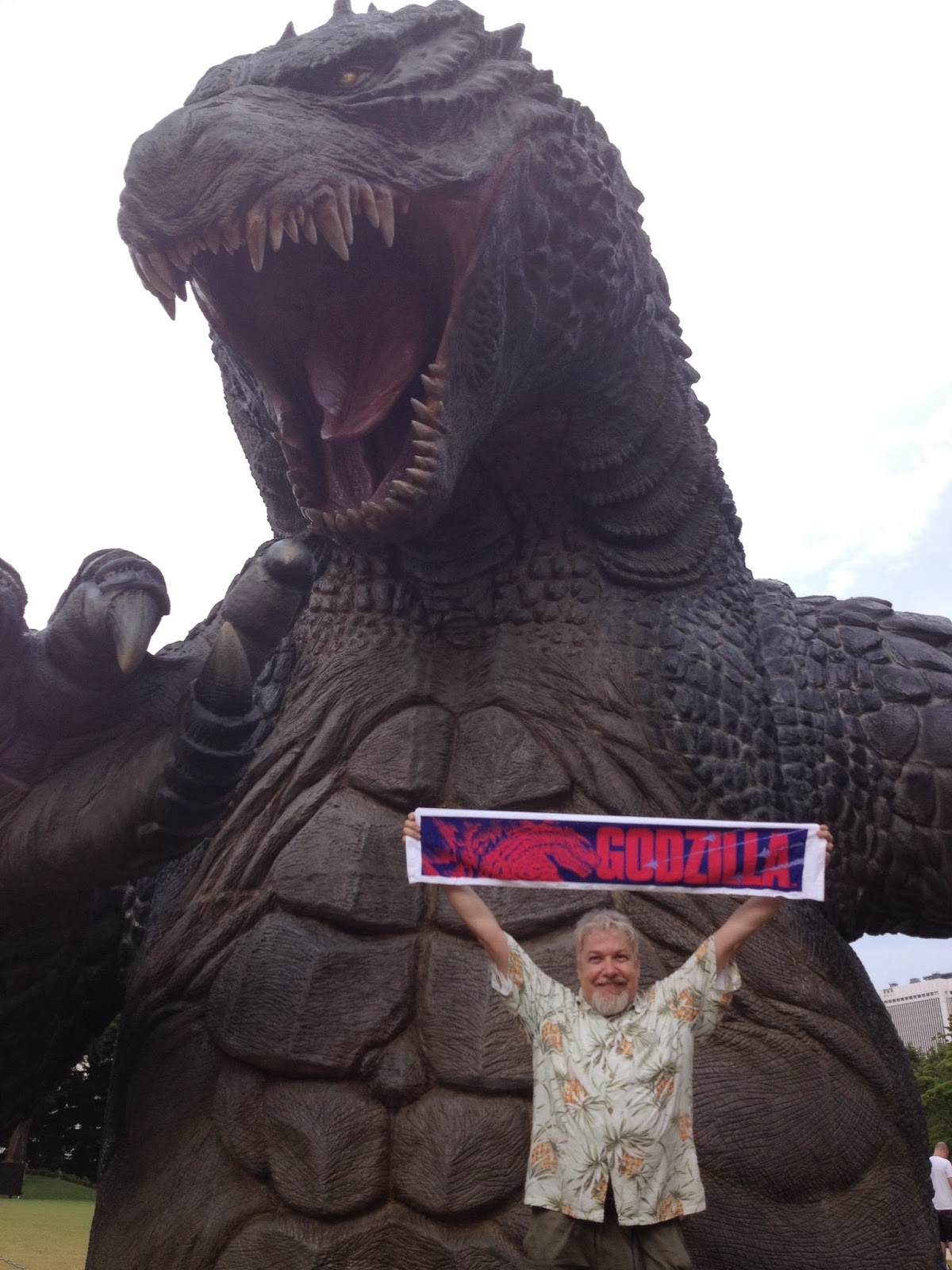 Showing off my t-shirt. 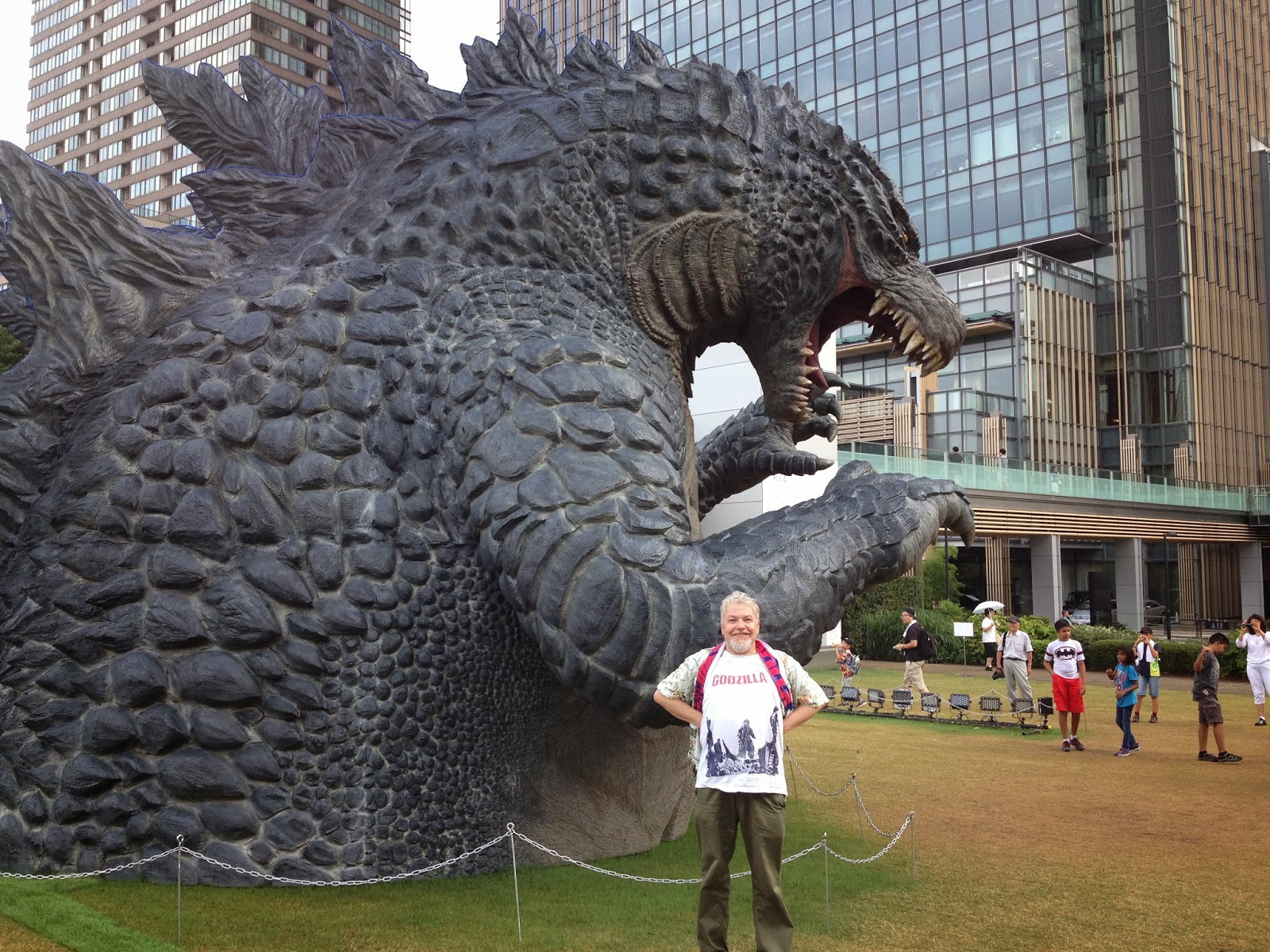 One of these days, I'll have to go see the statue in Hibiya and the one at Toho Studios.

Reality, What a Concept.

As everyone has undoubtedly heard by now, Robin Williams has passed away at the age of 63. Whether it was suicide or not is neither here nor there, he has been suffering from depression for years and finally succombed to it.

Unfortunately, the computer I'm using while on holiday in Canada won't allow me to download photos so this will have to be a verbal tribute only.

While everyone else can attest to catching him as Mork with Mindy as straight woman, I recall the initial Happy Days episodes where he made his debut. One of my first crushes was of Pam Dawber yet it was Robin and later the inspired casting of Jonathon Winters as his "son" that kept me tuning in.

Up until the early 90s, I could proudly proclaim that I had seen every Robin movie, starting of course with Popeye. Poohpoohed by critics, this movie was one of my all-time favourites and I'd play the soundtrack all the time.

I was dating a gal named Lois in the early 80s and we went to see The World According to Garp together. She was a fan of John Irving and just before the car accident, whispered to me, "Oh my God, they are following the book with this scene." Afterwards, every guy in the theatre gasped and a few girls giggled.

(A word of warning, this pc doesn't have Flash so I'm unable to view what the YouTubes are that I'm posting. Don't blame me if they're incorrect or non-pc.)

I barely recall The Survivors but do recall enjoying Moscow on the Hudson.

The Best of Times, Club Paradise (I found Rick Moranis more memorable than Robin) and Seize the Day were amusing but not extremely so. (You can search for these YouTubes yourself.) I'm fairly certain that I saw the latter movie at the Toronto Film Festival.

Then along came a little movie called Good Morning Vietnam and that changed everything. That's another soundtrack that I listened to all the time only this time I loved his improv on it more than the tunes.

Not sure if you'll be able to view this copy of The Adventures of Baron Munchausen, but you should stop reading this and watch it right now.

Then the guy starts getting oscars and nominations or other critical acclaim for Good Will Hunting, Dead Poets Society, Awakenings, The Fisher King etc. I rather liked him in Dead Again and even in lesser movies such as Hook, it had its moments because of him. One way of distinguishing between his comedy and drama: Robin with a beard--serious; Robin without a beard--funny.

I believe we now come across a movie of his that I've never seen, Shakes the Clown nor did I see (hear) his voicework in Ferngully.

Great in Alladin, uneven in Toys, and funny in Mrs. Doubtfire, a movie that inspired all kinds of cross-dressing comic roles from other lesser comedians.

We're now into some unseen territory, so I won't even comment on Being Human, Wong Foo or Nine Months.

Great in Jumanji, soso in The Birdcage and meh in Jack, Robin is proving his versatility with Hamlet and Deconstructing Harry and I must admit that I've never seen Father's Day nor Flubber.

Then along come two movies that I absolutely detest. For the first time ever, I walked out on a movie, What Dreams May Come though it wasn't that much of a hardship to leave for we had snuck into the pic in the first place. Patch Adams was sickenly sweet and definitely not to my taste but some Japanese must have liked it for there's a restaurant in Natori that has named itself after Patch Adams! Bicentennial Man is pretty poor and I can't offer an opinion of Jakob the Liar for it has gone unveiwed by me.

A.I. was pretty good, One Hour Photo is great and until you get to R.V. which I saw on Cable. Sad to say that apart from Night at the Museum 1 and 2 and Robots, I haven't seen any of his movies in this millennium.

I'm looking forward to Night at the Museum 3 and hopefully I'll catch a few more of his recent releases on Cable as well.

RIP Robin Williams, you have given me hours of entertainment and I thank you for that.

ps. I made a snarky comment on Facebook about selling a comedy album of his that I own (see this post's title) for more money now that he's gone. I hope to think he'd appreciate that line.
Posted by Michael Jones at 1:04 pm No comments: Links to this post