You Go Yurei, I'll Go Mine.

Japanese ghosts are much cooler than your typical North American ghost. They are creepier, legless spooks that haunt you psychologically as well as physically.

First up, some definitions (scammed from the great article on Japanese Ghosts by Jim Screech-which is a pretty spooky name in its own right!)

お化けObake / 化け物Bakemono
Literally, "transforming thing." Refers to any type of preternatural being. Comprises yokai and yurei, and can also be used more generally to refer to anything that is weird or grotesque.

妖怪Yokai
Literally, "bewitching apparition." Encompasses a wide spectrum of ghouls, goblins and monsters--some frightening, some amusing, and many bizarre. Yokai usually appear at dawn or dusk.

幽霊Yurei
Literally, "dim/hazy/faint spirit." Spirits of the dead who remain among the living for a specific purpose, usually to seek vengeance. Yurei generally appear between 2 and 3 AM.

鬼Oni
"Demons" or "ogres." Ferocious creatures with horns and fangs that are best known for manning the gates of the various Buddhist hells and performing some of the tortures that take place in them.

I caught さくや 妖怪伝 (Sakuya, Yokai Den = Sakuya, Demon-Slayer) one night in the wee hours and it gave me a happy mix of giggles & goosebumps. Here are a few stills, from it including some yokai & FX. 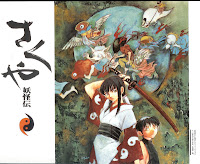 Someone who has been battling the Yokai longer than Sayuka though is none other than Kitaro! (Be sure to hit that link or the little Gegege Label below for more entries.)

Here are some highlights from げげげの鬼太郎４おばけやれきでたいけっせん！ 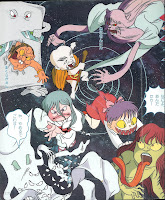 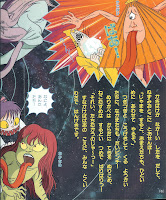 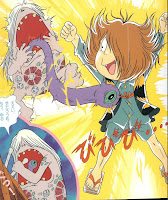 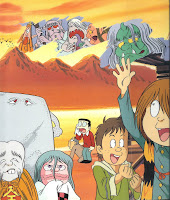 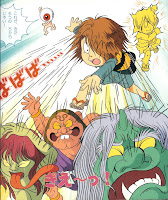 The other nice thing about Gegege is that the theme song is real easy and one of the few tunes I can sing at Karaoke! Try it for yourself...

Since there aren't a lot of ghosts & goblins involved with Godzilla, how about those two creepy mini-maidens who call upon Mothra when needed to battle against the Big G or some of his villains?

The original gals were played by ザ・ピーナッツ (The Peanuts) consisting of twin sisters, 伊藤エミ (Itou Emi) and 伊藤ユミ, Itou Yumi)It's tough to find a good version of the song with clips from the movie.

This version is just wacky for it includes a translation for you!

The original song went, as follows (in Indonesian, English, and literal Indonesian translation): 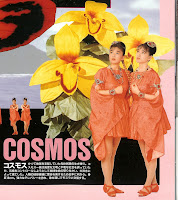 Here are the Cosmos Twins (not really twins) paging Mothra.

Finally, a more recent version of the signature tune:

Here are some highlights from 1992's ゴジラ vs モスラ! 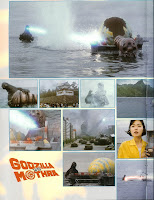 Featuring my all time favourite Godzilla/Mothra moment!
Posted by Michael Jones at 10:23 pm

Speaking of Japanese ghosts, I seem to remember hearing or reading that wells on a property is sort of symbolism for spirits or a haunting. Have you heard this? I think when I read this is was in connection to the Miyazaki film My Neighbor Totoro. That always struck me as an odd cultural difference that I wanted to explore further...

i had a room mate ages ago who used those 2 girls singing the Mothra song as our answering machine message.

a lot of people hung up on it.

John: I'll address your query in a later post.
Weic: I'd hang up too!

I'm a big fan of yokai and their kin. Thanks for all those great pictures. I'd love to see more. Thanks for Mothra and the Peanuts as well.