Watch this and get very creeped out and then we'll learn more about 天狗 (Tengu)...

I have lots of linking to do so bear with me. Shigeru Mizuki told tales of
山天狗 (Mountain Tengu) & 天狗つべて (Tengu Tsubute) and here are the pics but then, I'll go speak of more general Tengu. 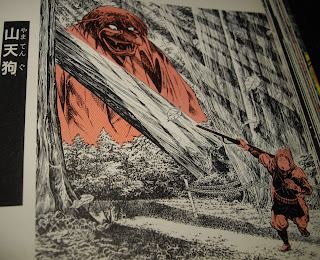 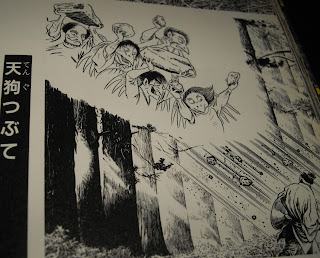 Tengu is a mythical mountain goblin. Tengu has a red face and extremely long nose, and carries a "hauchiwa (feathered fan)." Part man and part bird, tengu have supernatural powers, though they are mischievous rather than evil.
Tengu are worshipped by "yamabushi (mountain priests)," and they usually wear the costume of "yamabushi" with tall "geta (wooden clogs)." Minamoto Yoshitsune (a great warrior in 12th century) is famous for being taught martial arts and strategy by a tengu on Mt. Kurama, north of Kyoto.

Tengu also have been known to abduct children. In the Kamakura period (1192-1333), there were many sudden disappearance attributed to kidnappings by tengu. There is a saying "tengu ni naru (to become a tengu)," which means to become conceited.

Here is the story of 天狗の隠れ蓑 (The Tengu's magic cape), just follow along the "next" button and you can read the whole story. (I suspect that you'll be tempted to listen to the music but it's very tinny.) Once you've familiarized yourself with the story, you can watch this video of it.

If you want to dig up some more Tengu tales, Google these:

"The Old Man's Lump Removed" (瘤取り爺さん, Kobu-tori Jiisan): An old man has a lump or tumor on his face. In the mountains he encounters a band of tengu making merry and joins their dancing. He pleases them so much that they take the lump off his face, thinking that he will want it back and join them the next night. An unpleasant neighbor, who also has a lump, hears of the old man's good fortune and attempts to repeat it. The tengu, however, simply give him the first lump in addition to his own, either to keep their bargain, or because they are disgusted by his bad dancing.[32]

"The Tengu's Fan" (天狗の羽団扇, Tengu no Hauchiwa) A scoundrel obtains a tengu's magic fan, which can shrink or grow noses. He secretly uses this item to grotesquely extend the nose of a rich man's daughter, and then shrinks it again in exchange for her hand in marriage. Later he accidentally fans himself while he dozes, and his nose grows so long it reaches heaven, resulting in painful misfortune for him.

"The Tengu's Gourd" (天狗の瓢箪, "Tengu no Hyōtan"): A gambler meets a tengu, who asks him what he is most frightened of. The gambler lies, claiming that he is terrified of gold or mochi. The tengu answers truthfully that he is frightened of a kind of plant or some other mundane item. The tengu, thinking he is playing a cruel trick, then causes money or rice cakes to rain down on the gambler. The gambler is of course delighted and proceeds to scare the tengu away with the thing he fears most. The gambler then obtains the tengu's magic gourd (or another treasured item) that was left behind.

A tengu bothers a woodcutter, showing off his supernatural abilities by guessing everything the man is thinking. The woodcutter swings his axe, and a splinter of wood hits the tengu on the nose. The tengu flees in terror, exclaiming that humans are dangerous creatures who can do things without thinking about them.

Sorry this was full of lazy linking but it's bedtime.
Posted by Michael Jones at 11:50 pm